It was reported by the Miami Herald that two cruise ships collided on Wednesday, September 30, while docked in Cozumel, Mexico. The cruise ship accident occurred when very strong winds blew the Carnival Legend into Royal Caribbean’s Enchantment of the Seas at about 6:15 p.m. Central time.

Thankfully, both ships suffered minor damage and so far neither ship has received reports of injuries from the combined total of over 4,000 passengers. Besides the fact that many cruise lines such as Carnival and Royal Caribbean are based in South Florida, injuries on cruise ships are a major concern. As we noted on a previous blog entitled Cruise Ship Passenger Rescued off the Coast of South Florida, statistics showed that 11 million Americans took cruises last year, and that Carnival has had 38 passengers go overboard since 2000. 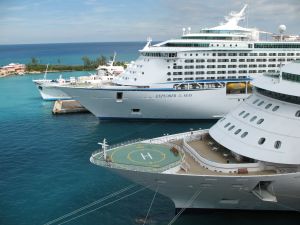 Of course, passengers must also be responsible, as the Bureau of Transportation Statistics notes that there were 51 alcohol-related recreational boating accidents in Florida in 2000.

According to USA Today, spokespersons for both ships stated that the Carnival Legend sustained broken glass and some damage to the open deck, while the Enchantment of the Seas had minor damage to the stern and railings of the ship. Cleared by Mexican authorities, both ships continued their itineraries to Belize. Currently, the Carnival Legend is embarking on a seven-night Caribbean cruise out of Tampa, while the Enchantment of the Seas is on a five-night Caribbean cruise out of Fort Lauderdale.