A 32-year-old man was injured in a motorcycle accident on Sunday, October 4 at the Palm Beach International Raceway.

According to the Sun Sentinel, the man crashed on the race track, which is located west of Jupiter, Florida, around 2:45 p.m. and was airlifted to St. Mary’s Medical Center in West Palm Beach. 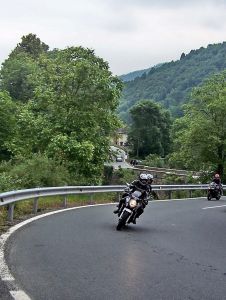 The man was turning when he lost control and hit a wall. He is currently in critical condition. The track was hosting a raceway on Sunday called the Champion Cup Series.

Recently, the Palm Beach Raceway, over 2 miles long with 11 turns, was the site of another serious accident. In May, a 9-yearl-old boy was racing a go-kart when he was critically injured, suffering burns to his torso and arms. The U.S. Consumer Product Safety Commission is currently investigating that incident.

Palm Beach County had 34 motorcycle fatalities last year, according to 2008 Florida Crash Statistics. Broward County had 37 fatalities, while Miami-Dade had 44, with a total of 9,618 motorcycle crashes in Florida. It has been our firm’s experience that some of the most serious injuries sustained by victims of accidents are resulting from either the drivers or passengers of motorcylcles. Therefore, whether in competition or just leisurely riding the streets of South Florida, motorcyclists should always take appropriate safety measures to minimize the risk of serious injury..