The Sun Sentinel reported that the Miami-Dade school board passed a ban on Tuesday which disallows bus drivers from using their cell phones. The ban also includes other district employees who use district-owned vehicles. However, the ban does not include school police officers.

This is just another case of a South Florida city cracking down cell phone usage while driving, as we have already seen a similar ban on texting in Parkland, Florida. The report noted that 19 states have banned texting while driving and six states require every driver to use hand-held devices if they are making a phone call. According to the Sentinel, there are some experts who think distracted driving is more dangerous than driving while under the influence of drugs or alcohol. While Florida does not have any official laws on the books yet, Rep. Doug Holder of Sarasota has been very active in pushing for legislation on this issue. 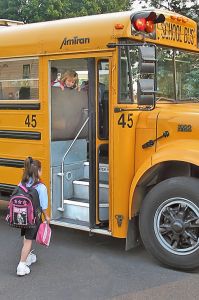 School buses safety is a major concern for parents. According to the National Coalition for School Bus Safety, over 22 million kids around the country ride the bus. A 2002 National Highway Traffic Safety Administration study showed that school buses were involved in over 26,000 crashes, which resulted in almost 1,000 incapacitating injuries. Earlier in October school buses caught everyone’s attention in South Florida when a man in Tequesta, Florida was struck and killed by a school bus.

In our practice we encounter the issue of cell phone use while driving on a daily basis. It is a fact that distracted driving causes accidents and accidents can cause serious personal injuries to those who are unfortunately involved in these accidents. Please contact our offices if you or someone you know has been injured in an automobile accident so we can protect your rights.