The Sun Sentinel reported on December 1 that an investigation is underway surrounding an incident just before Thanksgiving.

On November 25, a 62-year old pedestrian was struck by a car in Fort Lauderdale. Anostrave Benjamin is reported to be in critical condition at Broward General Medical Center. According to the story, a white Dodge Neon struck Benjamin while he was crossing West Sunrise Boulevard at Northwest Fourth Avenue Lauderdale. Though not much is not known about the vehicle, police stated that the Neon was missing hubcaps and had tinted windows. 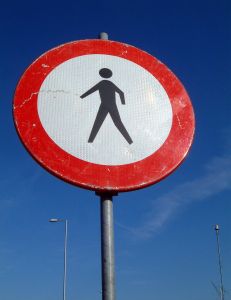 We have discussed many stories about pedestrian accidents on our blog. Attention has grown due to incidents such as this, and staggering statistics which show that 502 pedestrians were killed in Florida in 2008. Despite the drop in fatalities over the past four years, it’s stories like this that remind us to be careful when crossing the streets in the major metropolitan areas of South Florida, especially during the holidays.

If anyone has information regarding this incident, police have asked that you call Fort Lauderdale Traffic Homicide Investigator Cheri Creque at 954-828-5825 or Broward County Crime Stoppers at 954-493-8477.