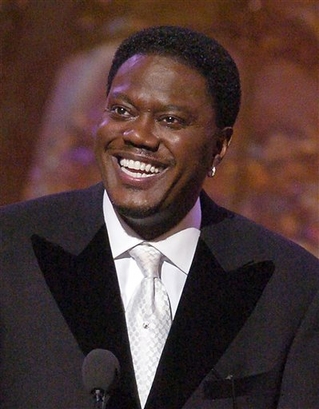 The widow of the late comedian Bernie Mac has filed a wrongful death lawsuit against his dermatologist in Chicago. Rhonda McCullough is alleging that Dr. Rene M. Earles failed to call emergency medical services on July 17, 2008 and instead held Mac at his South Side clinic for nine hours, causing a chain of medical events that would lead to his eventual death from pneumonia weeks later.

According to the Sun-Times Newspaper, McCullough claims that Earles “failed to recognize cardiopulmonary instability in Bernie” and “failed to recognize and act upon abnormal vital signs and signs of respiratory failure” during his visit in July. At the time, Mac was being treated for lesions on his head, face and neck that were caused by sarcoidosis, the inflammatory lung disease that the actor had been suffering from for more than 20 years.

Earles stated that although he had a cold, Mac seemed healthy enough for the treatments. Earles had been administering the same treatments for more than two decades and felt confident that the actor was able to go through with the therapy. Earles gave Mac oxygen around 2:30pm and let him sleep until 6:30pm. After that point, he noticed that Mac had a low-grade fever, was breaking out in a rash and was wheezing. He stabilized him and administered medication to help him breath easier.

Mac was able to leave the clinic on his own, just after 10pm and a limo took him to the hospital. Mac died from complications related to pneumonia on August 9, 2008. His wife is seeking $50,000 from Earles.

Wrongful death lawsuits are difficult at best. It takes a skilled attorney to be able to prove these cases and stand up to medical facilities and insurance companies who have teams of attorneys on their side. Contact a wrongful death lawyer to discuss your case today.