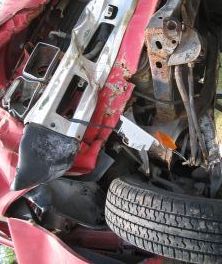 Early Sunday morning, 11 people were killed and 21 injured in a massive vehicle pileup on Interstate 75 south of Gainesville. The accident, which involved seven 18-wheelers and 12 passenger vehicles, left behind fiery wreckage which spanned more than one mile of roadway. Poor visibility from a mixture of heavy smoke and fog is being blamed for the crash. Rescuers on the scene stated it was nearly impossible to find victims in the dark cloud.

According to crash survivor Steven Camps of Gainesville, it was a horrific scene. Camps said he hard vehicles crashing into one another, explosions, and people screaming. He also stated it looked like the “end of the world,” had arrived. Camps said while he was headed home traffic on the northbound interstate stopped. While stopped, Camps’ vehicle was purportedly struck twice. He also claims he witnessed the car stopped next to his own smashed into and forced underneath a stopped semi-truck trailer. After that, Camps and his passenger exited his vehicle and ran to a grassy bank nearby.

Accidents occurred on both sides of the interstate and all six lanes of I-75 were closed throughout most of the day on Sunday as fire crews extinguished the last of the flames. According to a spokesman for the Florida Highway Patrol, portions of the northbound lanes actually melted from the various fires.

Ludie Bond, spokeswoman for the Florida Forest Service, stated roadside fires began along I-75 sometime on Saturday. Previously during the weekend, the interstate was closed for a short time due to poor visibility. It was later reopened prior to the deadly crash. Because no controlled burns were scheduled in the area, investigators are currently examining whether the roadside blaze may been the result of arson.

Sadly, automobile accidents are one of the leading causes of personal injury and death in Florida each year. Injuries sustained in a car accident may be very minor or quite disastrous as was the case on Sunday. Although the causes of a vehicle crash can vary, hazardous road conditions, driver inattention, driver impairment, and driver fatigue are commonly to blame. Other factors include defective vehicles, road debris, driving too fast for conditions, and aggressive driving. If you were hurt in a car crash due to someone else’s carelessness, an experienced automobile accident lawyer can help.

If you were injured or a loved one was tragically killed or injured in car accident in Florida, contact the law firm of Lazarus & Lazarus, P.A. Our diligent Ft. Lauderdale car accident attorneys will assist you with obtaining the compensation you deserve for your injuries. Our law firm represents clients throughout Florida including Palm Beach County, Broward County, Dade County, Fort Lauderdale, Weston, and Orlando. Call Lazarus & Lazarus today at (954) 356-0006 to schedule you free initial consultation. You may also contact us through our website.