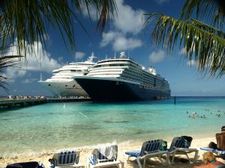 The United States Coast Guard has called off the search for an unidentified Canadian woman who is believed to have fallen overboard while traveling on a Florida cruise ship. A 47-year-old passenger on the Bahamas Celebration went missing while the ship traveled from Freeport, Bahamas to the Port of Palm Beach. The Coast Guard searched about 19,000 square kilometers of sea using at least four of the organization’s cutters and two of its aircraft. Bahamas air and sea rescue crews also assisted in the search.

According to Celebration Cruise Lines president Charles Kinnear, the woman was reported missing as the Florida-based cruise ship returned to the Port of Palm Beach on Wednesday morning. The woman’s boyfriend, also unidentified, claims he last saw her near a gift shop outside of the couple’s cabin around one in the morning. He said he realized she was missing after he awoke the next morning to find she never returned to their cabin. After he could not locate the woman, her boyfriend reported her missing.

After the Canadian woman was reported missing, cruise personnel reportedly searched the Bahamas Celebration twice before contacting the Coast Guard. By 8 am on Wednesday, the cruise ship was docked at the Port of Palm Beach. According to Kinnear, the ship would have turned around to search for the woman if personnel were alerted to her disappearance sooner. Although the woman is believed to have fallen overboard, cruise officials are hoping she somehow left the ship without detection. Upon the ship’s arrival at port, the woman’s passport was still in her cabin. The Federal Bureau of Investigation is currently looking into the woman’s disappearance.

Despite modern technology and safety measures, an individual may be unexpectedly hurt at any time on a luxury cruise vacation. If you or a loved one was injured while traveling as a passenger or crew member on a cruise ship, you may be entitled to recover compensation for your losses. An injury or wrongful death on a cruise ship may be governed by one or more state, federal, and international laws. An experienced personal injury lawyer can assist you in seeking compensation for your injury or loss.

Unfortunately, cruise ship accidents happen regularly. If you were hurt or a loved one was killed in an accident while onboard a cruise ship, contact the law firm of Lazarus & Lazarus, P.A. today. Our South Florida cruise ship accident lawyers will help you obtain the compensation your injuries merit. Our law firm represents clients throughout the State of Florida including Weston, Orlando, Fort Lauderdale, Broward County, Palm Beach County, and Dade County. To schedule a free initial consultation, contact Lazarus & Lazarus today at (954) 356-0006.

Canadian on Florida cruise may have fallen overboard, CBS News