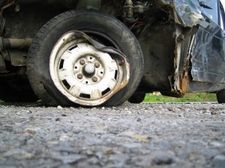 In early June, three people were killed and 12 others were injured on Interstate 95 in Volusia County when the driver of a 15-passenger van lost control and left the roadway. 57-year-old Vilbrun Bertrand of West Palm Beach was driving a group of Haitian migrant farm workers to New Jersey for the blueberry harvesting season when one of the van’s tires separated north of Ormond Beach. According to Sgt. Kim Montes of the Florida Highway Patrol, the van rolled repeatedly and several passengers were thrown from the vehicle.

Sgt. Montes stated there was visible damage to the van’s tire and the vehicle itself was significantly damaged in the accident. Although alcohol is not a suspected factor in the crash, the Central Florida automobile accident is currently under investigation. According to Sgt. Montes, a language barrier made the accident investigation difficult. State Troopers reportedly required the assistance of translators to interview the injured passengers at each of the four area hospitals.

Unfortunately, the van crash was the second fatal accident on Interstate 95 in Volusia County in a single weekend. On the previous day, a 40-year-old Titusville man was killed when his stranded vehicle was run over in the shoulder of the roadway by an 18-wheeler tanker carrying liquid nitrogen.

Automobile accidents cause a large percentage of the Florida wrongful death and personal injury claims filed every year. Tourists, students, and commuters risk being hurt in a car accident every day on Florida roadways. Some common causes of motor vehicle crashes include speeding, driver impairment, poor road conditions, driver inattention, and automobile defects. In Florida, those hurt in an automobile collision are eligible to receive compensation from a driver’s mandatory Personal Injury Protection (PIP) insurance to cover the first $10,000.00 in medical treatment. Oftentimes, however, PIP insurance is not sufficient to cover the immediate medical costs associated with recovering from a catastrophic injury as well as the costs of future medical treatment and a lifetime of pain and suffering. It is a good idea to contact a qualified Florida car crash attorney to discuss your options for recovery following any injury accident.

If you were hurt or lost a loved one in a motor vehicle or other accident, call Lazarus & Lazarus, P.A. at (954) 356-0006. Our experienced Miami-Dade personal injury lawyers are available to assist you with achieving fair compensation for your injuries. Our law firm represents clients throughout the State of Florida including Weston, Fort Lauderdale, Orlando, Miami, and Hollywood. We also represent clients in Broward, Dade, and Palm Beach Counties. To discuss your car accident injury case with a dedicated and caring attorney today, contact Lazarus & Lazarus through our website.

3 killed, 12 injured when van flips on I-95 north of Ormond, by Julie Murphy, Daytona Beach News-Journal