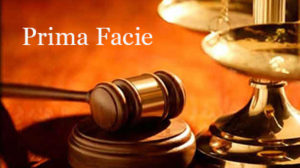 If you are involved in the highly contentious discourse that is politics these days, no doubt you have heard people use the phrase “that’s unconstitutional” and then move forward with their argument. The problem is that often the person hasn’t actually read the constitution, nor do they understand it. They have not established support for their point. Similarly, legal arguments sometimes should be supported by facts.

Latin for “at first sight,” Prima facie may be used as an adjective meaning “sufficient to establish a fact or raise a presumption unless disproved or rebutted;” e.g., prima facie evidence. A prima facie case is the establishment of a legally required rebuttable presumption.

If you wanted a court to accept up front that all concrete is hard, it wouldn’t be difficult to do that. But someone may counter that cement in a bag or wet cement is not hard, so you would have to clarify your position. “All gasoline flames are hot” would likely pass any challenge and be considered acceptable as “prima facie,” unless there is something I missed in my study of thermodynamics.

Recently in New Mexico a professional negligence case involved a pharmacy accused of filling powerful painkiller prescriptions for a patient who later died of an overdose. The suit alleged that the pharmacy ignored the dangerous warning signs that the patient was abusing the drugs by taking too many of them. Details of the case are at Lexicology.com.

The pharmacy responded to the complaint by saying there was no “prima facie” evidence that they had done anything wrong because, after all, there job was to fill prescriptions. They offered an expert affidavit and asked for a summary judgement, which was granted.

An appeals court later overturned that judgement because the expert affidavit ignored existing laws pertaining to the accepted “standard of care” for that particular profession. The medical standard of care is typically defined as the level and type of care that a reasonably competent and skilled health care professional, with a similar background and in the same medical community, would have provided under the

circumstances that led to the alleged malpractice.

That’s a brief explanation of “prima facie” and how it may pertain to a professional negligence case. The Law Firm of Lazarus and Lazarus works with victims of professional mistakes, negligence, and malpractice. Our primary goal is to protect your rights and help you recover from any damages or injuries you may have incurred due to someone else’s action or inaction. If you have questions, we’re here to help. Call us at 954-356-0006.