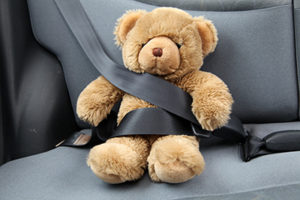 Being seriously injured in a car accident is a terrible experience. Imagine waking up in a hospital bed, not know where you are or how you got there, knowing only that you are in terrible pain. Now imagine being a child in that situation. It’s frightening.

Here are some statistics on older children involved in accidents.

Teens = Highest Risk Group: For every mile driven, teens between the ages of 16 and 19 are four times as likely to be involved in a car crash.
Teenage Car Fatalities: 5,000 teens in the 16 to 20 age group die each year as a result of a car crash.
Teenage Car Injuries: 400,000 teens in the same age group are injured each year in car accidents.
Disproportionate Population / Fatality Ratio: Teens make up 10% of the population but represent 12% of car crash fatalities.
Cost: 30% or $26 billion per year in costs are accounted for by drivers under the age of 24.
Driving Habits: Teenagers are more likely to speed, tailgate and only 10% report wearing seat belts.
Teen Male Drivers: Of male drivers ages 15 to 20 killed in car crashes, 38% were speeding and 24% were under the influence of alcohol.
High Risk Age Groups: People between the ages of 15 and 24 and over 75 are the groups most likely affected by car accidents.
Senior Drivers: Drivers over the age of 65 are second most likely to die in a car crash.
Safety Disparity: Despite the fact that older drivers are on average slower, safer drivers, they are more likely to die in a car accident than younger drivers.

In Florida, minors are defined as persons under the age of 18, and so a minor would need to have the consent of their parent or legal guardian to sue. If an injury claim is less than this $15,000, then it is legal for the minor’s parents or natural guardians to settle the claim without first obtaining court approval.

The Law Firm of Lazarus and Lazarus has dealt with cases involving children many times, and we understand the delicate nature and special considerations involved with these situations. We work hard for every case, and we protect the rights of our victims. If you are involved in car accident in south Florida, please call us at 954-356-0006 and we’ll arrange a confidential consultation at your convenience.