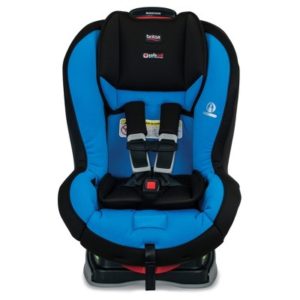 Everyone knows that children should be properly belted in to a child-restraint seat while in a moving car, right? Not necessarily. A recent survey revealed that 21% of adults in the U.S. don’t think it’s necessary to buckle kids in car seats when going on a “short trip.” (Source)

In 2013, three children were killed and 470 were injured every day in car accidents in the United States. (Source)

Finally, 26% of children killed in car accidents in 2014 were not restrained in car seats. (Source)

Lets see what the law says in Florida:

Chapter 316.613 of the 2017 Florida Statutes: 316.613 Child restraint requirements.—
(1)(a) Every operator of a motor vehicle as defined in this section, while transporting a child in a motor vehicle operated on the roadways, streets, or highways of this state, shall, if the child is 5 years of age or younger, provide for protection of the child by properly using a crash-tested, federally approved child restraint device.
1. For children aged through 3 years, such restraint device must be a separate carrier or a vehicle manufacturer’s integrated child seat.
2. For children aged 4 through 5 years, a separate carrier, an integrated child seat, or a child booster seat may be used. However, the requirement to use a child restraint device under this subparagraph does not apply when a safety belt is used as required in s. 316.614(4)(a) and the child:
a. Is being transported gratuitously by an operator who is not a member of the child’s immediate family;
b. Is being transported in a medical emergency situation involving the child; or
c. Has a medical condition that necessitates an exception as evidenced by appropriate documentation from a health care professional.

The statute goes on further – click here – but the penalty for failure to comply is a moving violation, and three points will be assessed against the driver’s license of the offender. This seems like a trivial punishment considering the possible damage to a child and indeed the entire family of a young life lost in an accident.

There is no excuse for not obeying this important law.

Using the right car seat is also crucial. Here is a link to a service that calculates the proper seat based on a child’s age, weight, and height: Click Here. 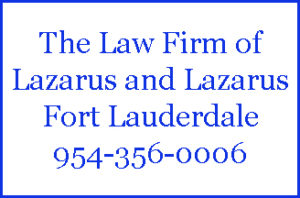 Once you have a car seat, almost every police department in south Florida will inspect it to make sure it is properly installed and you are using it properly.

The Law Firm of Lazarus and Lazarus has helped victims of serious auto, truck, and motorcycle accidents for over 20 years and unfortunately we have worked with many cases that involved children. Serious injuries to children are almost always preventable by simply taking the time to install and then a car seat.