If you’re older than 40 you know that cars used be much bigger and heavier than they are today. Fenders and bumpers used to be made of steel and when you drove a car in the 1970s and ‘80s you felt like you were in a tank.

Today’s cars are much lighter and include a lot of plastic, composites, and fiberglass in their design. The good news is that newer cars defy what you might think, and are much safer than older cars.

The government performs crash tests on cars and they publish the results online. You can check your car by visiting: https://www.nhtsa.gov/ratings

You’ll need to input you car’s year, make, and model to get the results which are from one to five stars.

Something that is disconcerting, however, is that while cars are getting safer there are more serious crashes resulting in injuries. According to 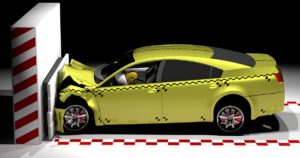 “…..traffic fatalities spiked in 2016, according to new data from the Department of Transportation. Cars may be safer than ever, but 37,461 people died on American roads that year, a 5.6 percent hike over 2015. While fatalities have dramatically declined in recent decades, this is the second straight year the number has risen. It’s too early to say why, exactly, this is happening. Researchers will need much more time with the data to figure that out.”

Some analysts believe the increase is due to lower gas prices and an improved economy. People drive around more when they have more money in their pockets.

Many experts believe there are more accidents because people are driving and texting more, or they are being distracted by other technical gizmos.

A few suggestions to keep you safe in your car:

We hope we meet you someday, but not because you’ve been injured in an accident. Stay safe!