Every young person looks forward to their first solo trip in an automobile! The feeling of freedom is overwhelming as you zoom down the highway with the windows down and your favorite song on the radio. You’re in control of the destination and the route, and it’s a day most people never forget.

When people begin to grow old, there often comes a time when it might be necessary to relinquish some freedom and leave the driving to someone else for safety’s sake. There may be no subject for a family to consider that is less stressful than asking a loved one to give up driving. A car means freedom and independence, and not having access to one means dependence on others, public transportation, or expensive trips in taxis and Ubers. 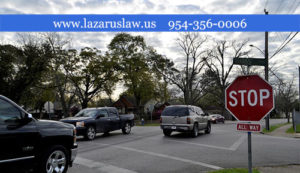 The American Automobile Association (AAA) recently completed a study that found most elderly drivers never have a conversation with their doctor or their family about the possibility of giving up their driving. Most respondents said it is simply because they fear losing their independence.

According to an article in Consumer Reports magazine, “most people under 65 are unwilling to talk to their parents about when it’s time to stop driving; in fact, 40 percent said they’d rather discuss funeral arrangements with their parents.”

Florida Class E (non-commercial) driver licenses for citizens and immigrants are valid for eight years for individuals under 80 years and six years for individuals over 79. Drivers over 79 must pass a vision test to renew. Other than the vision test there is no other screening, so friends and family of elderly drivers must speak up if there is a reasonable suspicion that a person is unable to drive safely due to some physical or mental deficiency.

The National Highway Traffic Safety Administration has an excellent page on their website about how to sit down and have a talk about elderly driver issues and it’s better to have discussions now rather than later when a decision may have to be made or after an accident. Click here to visit the page.

We have worked with the victims of serious car, truck, and motorcycle accidents over the past 26 years and some of them were the result of elderly drivers who were not capable to see or respond to other vehicles as well as they perhaps used to. These are preventable situations, and while we understand the serious implications of taking away an elderly individual’s ability to drive, we recommend that families at least examine the situation. Perhaps a family physician can help.

If you have questions about an accident you were involved in, please call us and we’ll do our best to help. We are available at 954-356-0006

The video below is not intended to shock anyone into an imprudent decision regarding an elderly driver, but it represents a real isolated incident involving a motorist who could have caused a very serious accident because of her confusion.