“Nothing in fine print is ever good news.” – Andy Rooney

How often do you sign your name without reading the contract? Most people just “assume” it’s ok to sign a document prepared by a big company, after all everyone else did.

But, moire and more companies are including arbitration clauses in the fine print area of their contracts which state if there is a problem you have to have your case settled with an arbitrator rather than taking your case to court. It’s probably not a good idea to do that. 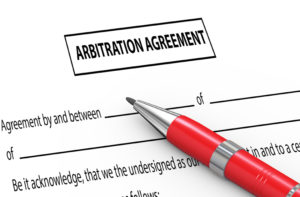 If you sign a contract for a cell phone, there’s not much of a chance you’ll be physically injured by your phone, although it has happened. What if you sign a contract for a gym membership, and a dumbbell falls off the wall and hits you in the head, causing serious brain damage? Do you want an arbitrator to decide how much you get for the gym’s carelessness and your pain and suffering? You should read the fine print and give it some thought.

What Does Arbitration Mean?

Arbitration is a conference meeting instead of a court trial. They are less formal but have an arbitrator overseeing the case. Unlike mediation, decisions made during arbitration are legally binding and cannot be reversed.These are designed to bring down the costs of a lawsuit, especially compared to traditional litigation. The purpose of arbitration is to come to a solution for both parties – mostly, no party outright wins like in a trial.

Areas where you want to be particularly aware of arbitration clauses involve medical agreements. When you sign paperwork authorizing any medical procedure, it would be prudent to carefully examine the fine print and look for any mention of arbitration. A recent issue before the Florida Supreme Court ruled against medical malpractice arbitration. Please see article here.

If you have been injured due to someone else’s carelessness, negligence, or malpractice and you believe there may be an arbitration clause involved, it does not necessarily mean you lose your right to sue. It may depend on whether the arbitration is “binding” or not. Your best course of action is to consult with an attorney.

The Law Firm of Lazarus and Lazarus has been working with victims across the state of Florida for over twenty years, and we do not allow doctors, hospitals, insurance companies, or other lawyers to bully our clients. We will fight hard for your right to receive the maximum fair compensation for your losses and injuries as permitted by law.

South Floridians are placing their loved ones into nursing homes and are increasingly signing away the patient’s rights to sue for nursing home negligence over sub standard care.

How can this happen? Easily, it occurs when nursing homes place arbitration clauses and/or agreements in the documents that patients and their family members sign upon admission to the nursing home. These admission documents are signed at a time when the family members and patients are in distress and not fully aware of the magnitude of the binding contractual terms they are agreeing to and the legal rights that they are forever waiving.

As a result, the patients are unknowingly signing away their legal rights to a trial by jury. This is the reason why a number of lawmakers are pushing legislation to make such agreements unenforceable. The lawmakers in the Senate, consumer advocacy groups and trial lawyers, take the position that families shouldn’t be giving away their ability to hold the nursing homes accountable for poor and substandard care in a court of law.

On Wednesday, June 18, 2008, a Senate committee will hear from the family of William Kurth. He fractured his hip and leg and contracted numerous pressure ulcers in a nursing home before he died. His family attempted to sue the nursing home for negligence, and a judge dismissed the case because Mr. Kurth’s wife signed admission documents which included a binding arbitration clause that required all claims go through an arbitrator. It is important to note that Mrs. Kurth was under extreme duress and on medication when she signed the papers that allowed her husband, a stroke victim, to stay at the nursing home. Kurth family members will appear before Congress and testify to the fact that their father, a World War II veteran, died at age 84 from infections that occurred because excrement and urine were not cleansed from his bedsores for days at a time.

A panel in the U.S.Senate is investigating the increasing use of binding arbitration by nursing homes. Their search of court records revealed that more than 100 lawsuits have been filed in the past five years challenging these types of arbitration agreements.

There are some that argue that arbitration has become a shield for large corporations to hide behind and decrease the quality of care given to their patients. Some companies actually conduct a cost benefit analysis and determine that it is economically more profitable to continue to provide substandard care and address any claims made by the patient and their families at a later date on a case by case basis. In the end, the companies benefit because the cost of arbitrating a negligence claim is minimal compared to an increase in daily costs at the nursing homes for more doctors, staff, supplies…etc.. Binding arbitration minimizes the nursing home’s expenses and forces patients and their families to resolve their disputes without any further redress. The ones who suffer from this “strategy” are the patients who are either seriously injured or die from the negligent care and their families.

This point was very well understood by Mr. Kurth’s children and well stated in written testimony provided to the Associated Press:

“It is economically more profitable to let people like my father suffer than to provide proper care. And now that our family is trying to hold the nursing home corporation accountable for its actions, Kindredcare is trying to bury our case by forcing us into a mandatory, secret, and binding arbitration process that they chose.”

Nursing Homes take the position that the arbitration program was designed to achieve several goals, including prompt resolution of legal disputes and lower costs to both residents and their families.

Binding arbitration does have a place in the American Judicial System and it should not be precluded as an option, but the decision has to be made by both parties after a dispute occurs. “Many incoming residents lack the capacity to make even simple decisions, much less judge the legal significance of an arbitration agreement,” Sen. Herb Kohl, D.-Wis., said. “Most are unaware that they are signing away their right to go to court.”