In early June, a family of six was killed after a small plane crashed unexpectedly in Polk County, Florida. The family was returning home to Kansas in a 2006 Pilatus Pc-12/47 plane following their vacation in the Bahamas when the aircraft reportedly began to break apart at 25,000 feet in the air. Those killed included the 45-year-old pilot, Ron Bramblage, His 43-year-old wife, Rebecca, and the couple’s four children who were between the ages of eight and 15.

According to safety investigators, the pilot issued a mayday after the right wing became unattached midair. Witnesses stated the aircraft began to spin as it descended into the Tiger Creek Swamp near Lake Wales, Florida. The debris field reportedly spanned approximately four miles of rough terrain. Tragically, one of the family’s teenage children was reportedly thrown from the aircraft before it hit the ground. His body was later found by members of the Florida Fish and Wildlife Conservation Commission about half a mile from the crash site.

Helicopters were used to locate wreckage from the air. Swamp buggies, all terrain vehicles, and horses were later used in order to reach the area and gather crash debris. According to Tim Monville, an investigator with the National Transportation Safety Board, the cause of the crash is still unknown. He stated that a large piece of the wing is still missing and it could take up to one year to complete the accident investigation. Monville said reconstructing the plane will likely be required in order to determine the exact cause of the crash.

Unfortunately, aviation accidents like this one are normally tragic and there are rarely any survivors. When an aircraft accident victim survives, the injuries sustained are often permanently disabling and extremely costly to treat. Negligence resulting from aircraft malfunctions or defects, pilot error, poor aircraft maintenance, or air traffic control errors cause most aviation accidents. Sometimes, more than one party negligently contributes to an aircraft crash. Additionally, large commercial airlines, or common carriers, must provide passengers with a higher standard of care than other aircraft operators.

If you or a loved one was hurt or killed while riding in a charter plane, private jet, helicopter, commercial airliner, or in any other aircraft, you should contact a skilled Florida aviation accident attorney as soon as possible to discuss your options for recovery.
END_OF_DOCUMENT_TOKEN_TO_BE_REPLACED 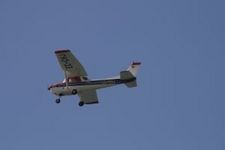 In April, an unresponsive airplane crashed into the Gulf of Mexico while on its way to Sarasota, Florida. After the Jacksonville Air Traffic Control Center notified the United States military that a Cessna 421C was flying close to one of the warning areas near Eglin Air Force Base, two New Orleans National Guard F-15s closely monitored the small plane for about three hours until it apparently ran out of fuel and went down about 120 miles west of Tampa. All attempts to hail the pilot of the Cessna were unsuccessful.

According to the military pilots who attempted to intercept the Cessna, the small plane’s windshield was iced over and the aircraft’s altitude fluctuated by about 10,000 feet. The plane also flew in circles high above the water. A representative from the Coast Guard stated the plane landed in the Gulf of Mexico upright and intact, but there were no indications the pilot was alive or made any attempts to exit the aircraft. The F-15 pilots also said they saw no life rafts deploy. The pilot, a 65-year-old Louisiana physician, was reportedly the only person on board the Cessna when it left Slidell, Louisiana. The plane later sank in about 1,500 feet of water before rescue boats could arrive. The body of Dr. Peter Hertzak was not recovered.

Although it is unclear what transpired onboard the Cessna, some have speculated the pilot may have lost consciousness due to a lack of oxygen. A similar tragedy occurred in 1999 when five people aboard a Lear jet carrying professional golfer Payne Stewart lost consciousness due to changes in cabin pressure and a lack of oxygen. Everyone aboard the jet died when it crashed several hours later after running out of fuel. According to Slidell Airport mechanic Bill Huete, the pilot regularly ensured the Cessna aircraft was well-maintained.

Airplane crashes are generally tragic and seldom leave any survivors. Those lucky enough to survive such a catastrophe will often live the rest of their lives with a permanently disability. If you were hurt or a loved one was killed in a commercial, private, or charter airplane accident over Florida, you should contact an experienced Florida aviation accident lawyer.
END_OF_DOCUMENT_TOKEN_TO_BE_REPLACED

By now, all of us have heard of and are following the story of the Northwest Airline pilots who earlier this month overshot their arrival to Minneapolis by 150 miles. The pilots notified investigators that they were distracted because they were using their laptops to organize crew schedules.

In a recent Sun Sentinel article, it reported that in light of the Northwest fiasco, Transportation Secretary Ray LaHood stated that the Obama administration will now expand its efforts in distracted driving to flying. According to LaHood, FAA Administrator Randy Babbitt is considering whether a uniform ban on use of electronic devices such as laptops during flight is in order.

As the article noted, lawmakers have expressed interest in tackling the issue of distracted driving. In September, LaHood held a summit on distracted driving, inviting researchers, regulators and other experts.

So what does this mean for South Florida drivers? We have already felt the effects of the push for banning electronic devices, as we noted in “South Florida City Bans Texting while Driving” and the Cell Phone Use section of our blog. With the White House concerned about the issue, we will likely see many changes which may have a dramatic effect on the litigation of auto accidents and aviation accidents in South Florida.

At the other side of the issue, however, is the concern for a driver’s autonomy and personal freedom while on the road. Our post entitled “Does Cell Phone Use Cause Florida Accidents?” recognized that this is a position which many people take on the electronic device issue.

Ultimately, we hope that as more developments in cell phone usage unfold, the determining factor in future legislation will be to maintain the safety of both drivers and pedestrians.

Bruce Barber, a money manager based out of Fort Lauderdale, Florida, and his wife and child were identified as passengers aboard a plane which crashed in the Everglades, south of the Palm Beach County line and west of Highway 27, according to WPTV NewsChannel 5. The plane was reportedly returning from Gainesville back to Fort Lauderdale when the accident occurred on Sunday evening.

There is speculation that the plane was heading back from the Florida-Tennessee game, as Barber was a known fan of the Florida Gators. The pilot reported some trouble on the Piper A32 single-engine plane before the crash.

Earlier, WPTV reported that two bodies were found and that there had been no confirmation as to whether Barber was on board. The names of the victims had not been announced, although the plane was registered to Barber. However, according to a WPTV update, a family friend stated that Barber, his wife Karen and son Payton were all on board. Phil Marsh, a friend of the family, was also on board.

The National Transportation Safety Board will investigate the plane accident to identify the cause, using airboats to conduct their search.

An NTSB table shows that there were 1,559 General Aviation Accidents last year, of which 275 were fatal. This is only a small decrease from the 1,650 accidents in 2007. However, the trend shows an overall steady decline in general aviation accidents since 1989, which reported 2,242 accidents, of which 432 were fatal.