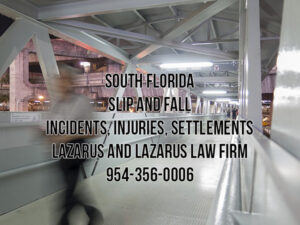 Don’t Believe the Stories You Hear – Contact an Experienced Attorney

Personal Injury cases run from cuts and scrapes to paralysis, permanent brain damage and everything in between. The causes are sometimes the fault of the victim but are most often the result of someone else’s carelessness or negligence.

There is a misconception held my many that “slip and fall” accidents are mostly minor, usually don’t need any medical attention, and that filing a lawsuit for damages is a waste of time. People believe that even if they get a monetary settlement it will be small and their lawyer will take most of it.

mis·con·cep·tion: a view or opinion that is incorrect because based on faulty thinking or understanding.

Consider this case: In Apopka, near Orlando, a jury awarded $948,000 to a woman who fell after slipping on a wet bathroom floor at the Walmart in 2016. Jessica Amador was shopping with her mother and helped her mother into the restroom, which had just been mopped, the complaint said. Source: Insurance Journal

Walmart has between 220 and 250 million shoppers visit their stores each week and they have had thousands of injury claims because of their failure to maintain a safe environment. The most common places for slip and fall injuries are:

We represent people who have received serious injuries, which means that the victim is in serious pain and/or has medical bills because of the incident. We will fight diligently to make sure you receive the maximum monetary settlement allowed by law.

It is the responsibility of every business owner to keep their property safe, but if you are hurt because one didn’t we can help. We’re available 7 days a week to speak with you and a call to (954) 356-0006 will put you in touch with Gary or Arleen Lazarus, bit highly experienced personal injury lawyers.

A woman named Maria Nucci claimed that on February 4, 2010, she slipped and fell on a foreign substance on the floor of a Target store. In her complaint, she alleged that she suffered bodily injury, pain, lost earnings, and other damages.

This case, coming before the District Court of Appeals in the Fourth District of Florida is interesting and complex because it involves images and videos from the Facebook account of Ms. Nucci and deals with the issue of whether they are private or not. The case also deals with technical rules of procedure involving the timing of depositions and also statutes involving discovery, or the gathering of evidence.

The court cited the following opinion from a Palm Beach County judge:
Social networking sites, such as Facebook, are free websites where an individual creates a “profile” which functions as a personal web page and may include, at the user’s discretion, numerous photos and a vast array of personal information including age, employment, education, religious and political views and various recreational interests.

END_OF_DOCUMENT_TOKEN_TO_BE_REPLACED

Slip and fall injuries happen frequently in South Florida. Unfortunately, injuries resulting from these types of incidents can end in serious tragedy. According to CBS 12 News, a man fell from a catwalk at the Kravis Center in West Palm Beach last week.

The man, Finton Hollingsworth, was a theater operation technician who was setting up for the Voices of Pride concert. He fell 30 feet onto the stage below. He died of head injuries at St. Mary’s Medical Center in West Palm Beach. The incident is still under investigation.

The statistics on slip and fall injuries are staggering. The National Safety Council reports that over 9 million disabling slip and fall accidents occur each year, which led to over 95 million lost work days and an average cost of $20,288.00. A survey by the Bureau of Labor Statistics showed that slip and falls are the most common type of work-related injury.

Of course, each incident is different, but with these numbers in mind, it is important for businesses to take all the steps necessary to ensure that they maintain a safe environment, so that their employees and their patrons can avoid injury.