A commercial truck accident can be far more catastrophic than an accident between two personal-use vehicles. A fully loaded commercial truck can weigh at least 25 times as much as a typical car. Because of this stark weight disparity and the basic laws of physics, most big rig truck accidents with other vehicles result in serious, even fatal, injuries. 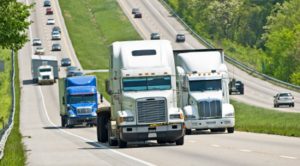 Commercial truck drivers have received special training and are generally more careful on the road than automobile drivers. In 2012, there were 3,921 people killed and 104,000 people injured in crashes involving large trucks (gross vehicle weight rating greater than 10,000 pounds).

It is important to note that of those 3,921 people killed in big-truck accidents in 2012, 697 were in the big truck and 3,224 were occupants or drivers of the other vehicles, or pedestrians. This tells us that trucks are, by their size alone, dangerous. Drivers should always be alert and cautious but even more so when a large truck is nearby.

An April, 2016 video of an accident in Miami demonstrates the immense power and destructive forces involved when a heavy truck impacts passenger vehicles.

In addition, truck accidents can be made worse by the freight the truck is carrying. For example, if hazardous or flammable materials (such as gasoline or industrial waste) are on board a big rig involved in an accident, secondary injuries from that dangerous cargo can result.

A few facts about big-truck transportation:

Drowsy driving can contribute to truck accidents, and here are the rules regarding consecutive hours for commercial drivers carrying property:

According to a study done by the Harvard Health Watch, an average American spends 101 minutes per day driving.

A commercial truck driver involved in an accident may be an independent driver, may work for a small company that does not provide insurance, or might be an employee of a large corporation that does provide insurance. Who is liable for damages in a truck accident can be very confusing, and requires extensive study to get to the facts.

The Law Firm of Lazarus and Lazarus has been helping victims of truck accidents in south Florida for over 20 years. We have the experience and expertise to properly investigate these terrifying events in order to understand how to help the injured participants. Reaching out to us is easy by calling 954-356-0006 and asking to speak with Gary or Arleen Lazarus. We will work hard to protect your rights to proper compensation for your damages. We are experienced Florida Truck Accident Attorneys.

Can a Fly Really Fly 500 Miles Per Hour?

I recall having a conversation with a friend once about a fly on an airplane. The man said that he was bothered by a fly that had somehow made its way onto an airplane he was traveling on and he expressed that it annoyed him the whole trip. Then he pondered “if the fly was on his shoulder, and flew forward six rows to bother someone else, was that fly actually flying as fast as he plane?”

This conversation took place at a party where perhaps my friend had consumed an adult beverage or two so he wasn’t necessarily all there. A fly cannot travel 500 miles per hour under its own power, nor can my friend. Both were actually experiencing Newton’s First Law of Motion: An object at rest stays at rest and an object in motion stays in motion with the same speed and in the same direction unless acted upon by an unbalanced force.

You feel acceleration when the plane takes off and then when it reaches a constant speed, you feel no sense of speed at all.

This applies to a motor vehicle as well, when you’re traveling 75 miles per hour in a 3000 pound car on the highway, talking to others in the car, sipping a Starbucks and listening to music. All seems peaceful and at rest, when in reality you are part of a very powerful force with tremendous potential energy.

Force is defined by another of Newton’s Laws – he made laws, but he wasn’t a lawyer, imagine that – and this is the law that relates directly to the damage that is done in a vehicle accident.

The Law is stated F=ma or the Force of an object is equal to mass X acceleration. We don’t want to get very technical here, but it is important to understand the very real potential for tremendous damage when a vehicle you drive impacts another vehicle or object. And the larger the vehicle, the more damage.

When you’re driving a fully loaded SUV, you’re driving a truck. The average weight of a Cadillac Escalade is 5,552 to 5,815 lbs. The weight of an average Toyota Corolla is 2,800 to 2,875 lbs. When you plug those numbers into the Force equation there is a big difference in the effects on vehicles, property, and human bodies. All vehicles can be dangerous but trucks require even more caution.

We are only a little over 3 months into the year, and already in Florida (all vehicles) the numbers are very disturbing:

It’s very important to be ever-vigilant of the incredible power that rests in your hands when operating any vehicle. Buckle up, be cautious, and never drink and drive.

If you are involved in an accident, it’s prudent to contact an attorney who has experience dealing with the aftermath and injuries involved. The Law Firm of Lazarus and Lazarus has been helping the victims of vehicle crash injuries for over 20 years. They are eminently qualified to guide you through the legal and medical issues you may be facing. Call Gary and Arleen Lazarus at 954-356-0006.