The railroad is what allowed south Florida to be developed. The dream of one man, Henry Flagler, was responsible for early settlers to finally get the food and supplies needed to build communities and then cities up and down the peninsula. Today we have freight trains, Tri-Rail, Amtrak, and the new Brightline will soon be speeding along on the tracks that parallel the busy Dixie Highway corridor through Miami Dade, Broward, and Palm Beach counties.

Cars and pedestrians are natural enemies for enormous trains moving at high speeds, and while the nationwide statistics are better over time, many people are concerned that more speeding trains will bring more accidents.

Here are numbers for train accidents at crossings: 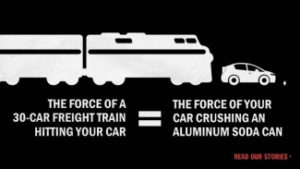 The Federal Railroad Administration provides a graphic that explains the force of a freight train hitting a passenger car is equal to a passenger car crushing a soda can.

Many communities in south Florida have requested “quiet zones” where Brightline trains will not sound horns, and this is another concern for traffic safety experts. The fact that south Florida is home to millions of older people who may have some hearing loss is concerning.

There are many variables involved when a train hits a car at a crossing, for example, were the gates properly deployed? Was the train traveling at the proper speed? Did the train blow it’s horn? Was the car trapped on the tracks? What were the weather conditions? All these factors must be examined in order to determine if there was negligence involved.

Everyone hopes the new Brightline is a success for south Florida, and only time will tell.

If you are involved in an accident involving a train, the attorneys at Lazarus and Lazarus are experienced handling these incidents and we are available to answer your questions about what to do. Reach out to us at 954-356-0006, and thank you.

Several publications in South Florida have reported on an auto accident last week in Fort Lauderdale in which a car was stuck on the tracks and hit by a Tri-Rail commuter train. Two women were killed in the accident while another passenger was seriously injured.

However, as a recent article in the Sun Sentinel showed, this is not the first auto accident with a train. Unfortunately, as the article noted, South Florida has a very high incidence of train accidents. For example, along with the recent accident in Fort Lauderdale, a similar accident occurred recently in Pompano Beach in which a train struck a car, killing one woman and injuring another.

The article listed five other accidents lthis past year alone, involving both Amtrak and Tri-Rail trains. The accidents were spread throughout the South Florida area, in cities such as Pompano Beach, Deerfield Beach and Boynton Beach. Most of the incidents involved a collision with a car which was stuck on the tracks at a railroad crossing and involved serious injury or death.

It is difficult to pinpoint the cause for this high rate of accidents. Many organizations, such as Operation Lifesaver, were established to educate people on the issues and to prevent these accidents. As stated by Operation Lifesaver, statistics from the Federal Railroad Administration show that there were 2,391 highway-rail crossing collisions last year. Florida ranked 9th among the Top 15 states with 75 collisions, while the highest ranked state, Texas, had 228 collisions.

Despite efforts to educate, the problem persists in South Florida. In the wake of increased cell phone usage while driving, growing impatience of drivers during rush-hour traffic and increased dependence on public transit during tough economic times, changes must be made by drivers, regulating bodies, train companies and the cities which rely on must take action to ensure the safety of drivers, pedestrians and passengers.

It is important that drivers take it upon themselves to be proactive and use proper safety procedures to ensure the safety of themselves and their passengers. Following are seven steps recommended by Operation Lifesaver which should be used by all drivers of motor vehicles when approaching and crossing train track intersections:

1. Approach crossing with care. Slow down when you see an Advanced Warning Sign.

2. Prepare to stop. Turn off fans and radio, roll down windows.
Look and listen for a train.

4. If it won’t fit, don’t commit. Trains extend beyond the width of the rails at least 3 feet on each side. If your vehicle has a trailer, remember the additional length.

5. Double check, back left and right. Before you move look in both directions.

6. Cross tracks with care. If your vehicle has a manual transmission, use a gear that will not require shifting until you reach the opposite side.

7. Keep going once you start, even if lights start to flash or gates come
down.