Up north, roadwork is done primarily in the spring and summer months, but in south Florida it’s a year round project. As we all know, it never seems to end! Everyone needs to be more careful in work zones, for our safety, the worker’s safety, and for other drivers as well.

Motorcycles are particularly vulnerable to uneven surfaces and sudden, unfamiliar detours. When roads are designed, they are usually planned with plenty of space to prepare for curves and changes in roadway elevations. When road crews are laying out temporary detours, there is often not such meticulous planning, and all drivers are startled by big orange signs.

Experienced motorcyclists know that the surface of a roadway is critical to how a bike handles, effects stopping distances, and how a sudden turn can turn into a slide along the pavement.

According to the Federal Highway Administration, an average of 700 motorists die each year in approximately 70,000 work zone crashes. This accounts for about 2 percent of all traffic fatalities in a given year. Of those fatalities, around 10 percent are motorcyclists.

While efforts are made to protect workers in construction zones and blame is often placed on the driver in a work zone motorcycle crash, seven times as many drivers die in these accidents as highway workers. Even when motorists obey warning signs, these zones present hazards that endanger drivers, particularly drivers of motorcycles.

Often, work zones are not properly marked with caution signs, and the construction companies are partially responsible for serious accidents.

Here are some of the roadwork hazards that are particularly dangerous for motorcycles:

There are, of course, many other hazards present in roadwork zones, so as the big orange signs say: SLOW DOWN.

It’s also important to remember this: While you might be going slow, and being very alert, other drivers probably aren’t and in a battle between a car and a motorcycle, it’s usually the bike that loses.

We have represented many victims involved in serious motorcycle accidents, and out primary goal is to protect our client’s rights to obtain compensation for their pain, suffering, and injuries. Call us at 954-356-0006 if you have questions, we are here to help.

We covered the first 5 of 10 common causes of motorcycle accidents, and we’ll continue in this post. One thing we have learned is that each 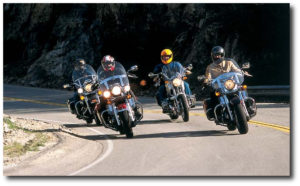 motorcyclist has their own style of riding, as well as their own philosophy on how to avoid accidents. We encourage every rider to take regular safety classes to stay fresh on different techniques, rules, regulations, and safety equipment.

6 – Your Riding Partner Does Something Stupid

How to Avoid: Riding alone is fun, but riding in groups is more fun for a lot of motorcyclists. Riding is groups can be very dangerous however if everyone isn’t on the same page. Before you go out on a ride discuss group riding etiquette and ride in a staggered formation. It’s best to ride only with experienced riders when you’re traveling in a group. Inexperienced riders should probably stay in the rear while they watch and learn.