When a plane crashes, everyone wants to know what kind of data will be obtained from the “black box.” Even though they are usually bright orange, the “black” boxes have millions of pieces of data that help investigators figure out what caused the accident.

Trucks and cars don’t always get along on our roads and highways, and when they collide with each other the resulting damage can be devastating. Having access to the black box data can help put the pieces together.

Most semi-trucks and commercial vehicles manufactured in the United States have Electronic Control Modules (ECM), which are integrated into the engine’s components. These control the engine’s performance, ensure fuel economy, regulate emissions, and protect the engine from abuse. They are used to troubleshoot mechanical issues and even monitor how the vehicle operates. They are also a critical piece of evidence following a collision. These ECMs could record data that is useful in determining what happened during the accident, as well as moments leading up to it.

Depending on the make and model of the semi-truck, the ECM could record a multitude of data. The events recorded are referred to by different names, such as Hard Brakes, Quick Stops, Sudden Decelerations, etc. But, the type of data recorded by the ECM may include:

• Average speed of the truck 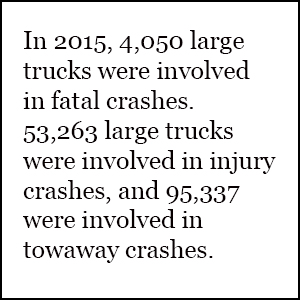 Truck accidents involve issues that make them more complex than most car accidents. Large truck are usually owned by corporations and may have multiple owners. Insurance is different than car insurance, and there are different rules and regulations that cover trucks.

Truck accidents have been a major portion of our practice here at Lazarus and Lazarus, and we have analyzed the data from black boxes many, many times. Our clients are our main goal, getting them the maximum compensation allowed by law, so if you have any questions please call us at 954-356-0006 and we’ll set up a consultation. Thank you.