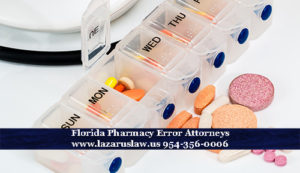 In most workplaces a small error doesn’t cause a problem, but at the pharmacy it may jeopardize someone’s life. A recent case involved a woman who was scheduled for an MRI examination. Her physician prescribed a mild medication to calm her nerves because she gets claustrophobic, but what was supposed to be 1/4 milligram dose was dispensed from the pharmacy at 2 full milligrams and the patient passed out during the test. Paramedics were summoned and they were able to revive her after some time.

Another situation was a name mix-up. A man who thought he was picking up a muscle relaxant actually received a bag with pills intended for a man with the exact same name. The man went home and began taking pills intended to treat a psychological issue, and he attempted suicide. Fortunately he survived and is suing the pharmacy for the error.

And in a move that could cause even more errors and mix-ups, there are more companies moving into online prescription ordering and fulfillment, including Amazon. CBS Miami recently reported on the growing trend, and a professor of pharmacology at FIU said “Almost 50% of patients take their medication incorrectly and that causes emergency room visits,” she told CBS4 Anchor Lauren Pastrana. “Over 3.5 million physician office visits (happen) yearly due to medication-related problems.”

All the publicity about these serious mistakes has prompted more training for pharmacists and pharmacy techs, and internal policies and procedures have been tightened according to the major pharmacy chain stores, but the problems are not going away.

There is a reason for the consultation window at the pharmacy but it seems that few people take advantage of it. We strongly advise everyone to closely examine their prescriptions before leaving the pharmacy. Ask the pharmacist to come to the window and check the name, the medicine, the doctor, the dosage, and the instructions. The few extra minutes it takes to do this may save you from being seriously hurt or worse by a pharmacy error.

If you ever have any confusion whatsoever about a pill or pills that you can’t identify, and you’re not sure if it’s the right one, return to the pharmacy and ask.

The Law Firm of Lazarus and Lazarus has been helping people who are victims of either doctor or pharmacist mistakes regarding prescription medications for over 20 years. We also handle cases where people are hurt due to a problem with the drug because of harmful side effects. We are very experienced investigating cases to find the cause of problems whether it is a pharmacist, pharmacy, doctor, hospital, or drug company and we get the facts and answers needed to proceed with whatever action is necessary to protect our clients.