States across the country have been enacting new laws to deter drivers from using their hand-held devices but Florida lagged behind until this year. Beginning Tuesday, October 1st, law enforcement will start enforcing the new law with warnings…for now.

Beginning January 1st, 2020 drivers who are caught with any hand-held device in their hands while driving will face a ticket, fine, and points on their license.

For those who think a texting and driving law isn’t really necessary, we would like to remind you of a few facts:

1- Distracted driving accounts for approximately 25% of all motor vehicle crash fatalities.
2- At the time of fatal crashes, teens have been the largest age group that reported being distracted while driving. 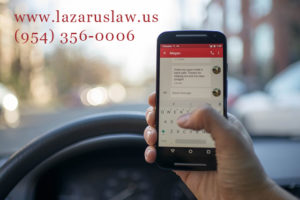 3- Driver distraction is reported to be responsible for more than 58% of teen crashes.
4- In 2015, 391,000 injuries were caused in distracted driving related accidents.
5- In that same year, distracted driving was cited as a major factor in 3,477 traffic deaths.
6- 9 people in the U.S. are killed each day as a result of crashes involving a distracted driver, according to the Department of Motor Vehicles.
7- Distracted driving has been called an American epidemic and is completely preventable.
8- Since there is no way to test for distracted driving after an accident occurs, it’s widely believed that the number of crashes, injuries, and fatalities caused by distracted driving are vastly under reported.
9- It takes only 3 seconds after a driver’s attention has been diverted from the road for a crash to occur.
10- Car crashes are the number one killer of teens in the U.S.

We will tell you that from our professional experience, texting and driving causes horrible crashes, injuries, and death to people of all ages. We have represented many victims who have life-changing permanent disabilities and pain because of distracted drivers.

Hands-free use of cell-phones will be permitted but it’s important to note this from livescience.com:

Talking on your phone while driving — even if you use a hands-free connection — is still dangerous, a new study from England finds.

Conversations of any kind can be distracting if they require a driver to use mental imagery, according to the study.

We have always urged people to turn their phones off while driving and pay attention to the road.