Most people who have lived in or traveled to several states have an opinion on the state with the worst drivers. “Boy, those New York drivers are the worst,” I’ve heard several people exclaim over the 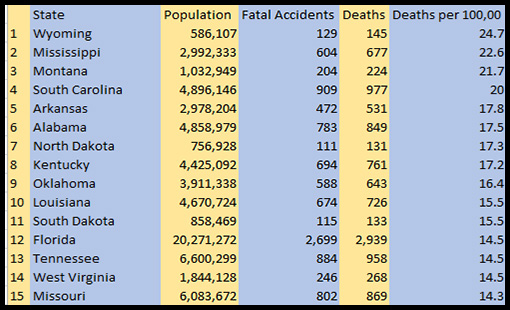 years. Or, “Don’t go to Florida, they are terrible” is another. Of course we live here, so we have to drive in Florida. What are the numbers on serious, fatal accidents?

Florida is number 12. That’s not the twelfth best, it’s the twelfth worst. The worst 12 states as far as fatal accidents for 2015 are listed in the table to the right. Overall, there were 35,092 traffic fatalities nationwide in 2015.

Why Wyoming has such a high rate of fatal accidents is hard to figure, so we Googled it and found this from the Casper Star Tribune – “Nearly twice as many people have died on Wyoming highways this year compared with 2013, and increases in oil field traffic and drunken driving may be to blame.”

Back to Florida. County-by-county, the rural counties in Florida have experienced higher rates of fatal accidents per person, and the worst 10 counties are: